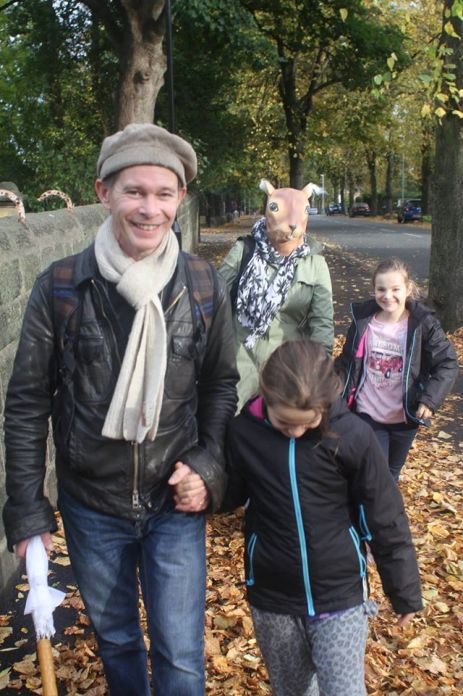 Last Friday I took part in a project led by a group of local artists some of whom I have got to know over the last year or so.  The Hope Generator is a joint project by the Institute for Crazy Dancing and i-move and the main organisers included some friends from Tea and Tolerance and a new face- Vanessa Grasse.

Vanessa’s name rang a bell from a chapter on women in On Walking by Phil Smith.  I didn’t finish this book, finding it rather repetitive.  The account follows in W.G. Sebald’s footsteps on the route around East Anglia described in The Rings of Saturn (of which more another time).  I did, however, really appreciate the chapter ‘Women and Walking’, which was a welcome glance at gender issues in this field.  Vanessa was one of several artists cited by the author as breaking the essentialist mould of women’s walking art practice as determined/constrained by fear and social convention.

It was great to meet Vanessa and I hope we will be getting together again to talk about collaborating, possibly also with the Hope Generator group.  This group has set up a Facebook page with ~350 members, recruited through social media and personal connections.  Their aim is to re-animate the Chapeltown landscape, seeking out routes and landmarks which identify the hopeful and the positive in an area which is often seen as deprived and beset with crime, then guiding groups of people using a range of techniques to help everyone to look afresh.  All of the six sessions organised over the weekend Oct 24/5 were fully booked with a diverse range of people, mostly local.  I went on the early evening walk and had to leave early.

It felt like first steps in this kind of work in the area- there are so many stories and worlds to find and excavate in Chapeltown, and it would have been good if there could have been more opportunities for participants to weave in their knowledge and thoughts.  I liked some of the methods for getting people to look anew- walking backwards and with closed eyes, being asked to find things in the urban landscape, smelling the herbs in the community garden, being shown places of historic significance, stopping to ponder challenging, open questions, stopping for a cup of tea and a Hope biscuit.  I especially liked the person in a squirrel mask who was sitting quietly at the top of the path which we had walked with our eyes shut!

The aims seemed very ambitious, in relation to the scale of the event.  I’m not sure if the organisers see it as a first step to engaging more people, gathering more stories, doing more walks, getting it out via social media as a series of walk templates which people can add to and use independently? Then there is the question of how the work is recorded.  There are lots of photographs on the Facebook page, contributed by a range of people, and I think it was being filmed but there might be more that could be done- gathering from the space, intervening (there was some of this, picking fragrant herbs to keep, the post box whose MON sign was inverted to make NOW) but maybe more.  I don’t think participants were asked to comment or add their stories and experiences- maybe this would add to the richness captured.

It was an interesting and positive experience, carried out by people who are very creative and work with integrity.  I hope it is something which can be built on for more real re-generation.