This is a rubbing of the exterior wall of the building pictured below in the old mining village of Nenthead.  It was built as a smelting house when the mines were still working (now being used as a coach shed) and was architecturally innovative in its time, with an external steel frame (the diagonal in the rubbing).  It is unsafe and soon to be demolished so I was keen to catch a trace of it. 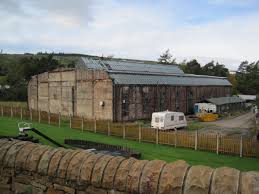 I was on holiday walking around moors and valleys on the borders of Durham, Northumberland and Cumbria (those four words are a like a little found poem- these places are dear to me).  The landscape is marked by the remains of hundreds of years of mining and related industries.  The pit-heads, slag-heaps, shafts, chimneys and access tunnels, and the huge cavities scoured out of the land, have a brutalist aspect, in terms of the damage done.  But they also resonate with the scale and bleakness of the moorland and the naturally occurring, bony, exposed rocks- made of the same stuff as the old buildings now crumbling back into the ground.

So rich pickings for me in terms of people, place, history and Doreen Massey- style reflections on space and politics.  I have taken digital and film photographs, brought home stones and pressed flowers (Comfrey and Sweet Cicely, another found poem).  I’ve got a painful hip at the moment so, less time spent walking but more time talking to people and gathering their stories.  I like doing this very much and am quite bold in engaging with people- though this is much easier when the locals are as friendly as they are up there.

Also found this fascinating bit of local history at https://northernvicar.wordpress.com/2012/07/12/nenthead-st-john/

(Nenthead) is England’s highest village at 1,500 feet, and has been a major centre for lead and silver mining. The London Lead Company was formed by Quakers in 1704, and they recognised the moral responsibility they had to their workers. It is probably the first purpose-built industrial village in England and laid the foundations for today’s social welfare system. The Quakers built decent housing, a school (compulsory schooling for all children), a reading room (free lending library), public baths and a wash-house for the miners and their families. Apparently it was the first village in the UK to have electric street lighting from excess power generated by the mines.

The picture below is of a back garden in Nenthead, a lovely example of ‘outsider art’.  Buildings from the village and further afield have been recreated in miniature using appropriate stone and building materials and methods.  Lowson Robinson, now retired from working in the mining industry, has created a model of the Quakers’ original model village, as well as Big Ben (because he doesn’t like wearing a watch) and other buildings which take his fancy.  Whilst the real buildings and industries are declining, falling into disrepair or being demolished, Lowson is re-making the space, with authenticity and care, and keeping the stories alive.

One thought on “Traces, people and places”