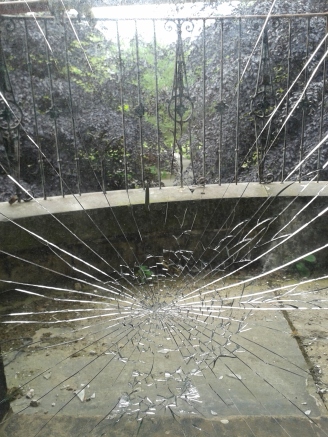 Broken window at Potternewton Mansion (of which more later)

There has been a big gap since the last post here.  Various reasons- mostly to do with domestic life and family matters.  So.. time to pick up the threads.

I have become very interested in the work of Bracha Ettinger (thanks to Carla Moss) and was lucky enough to attend a couple of excellent small-scale discussions with her recently at the Tetley. She is a striking person with challenging, intricate and extraordinary ideas.  I struggle to articulate my thoughts, or describe her ideas in any concise way without feeling that I am undermining their significance and complexity. But I’ll try.  Here are some of the themes which have stayed with me:

The centrality of vulnerability and trauma.  Ettinger was born in 1948, the child of Polish Jews who fled across Europe and finally escaped to Israel (Mandatory Palestine as it was then) in 1944.  The rest of her family died either in the Lodz Ghetto or in Auschwitz.  Her work, like many artists born in the immediate aftermath of WW2, attempts to come to terms with, and find meaning in, the Holocaust.  In terms of her visual art her paintings may take years to complete and comprise many thin layers of oil paint over images, photographs etc, collected over time, making complex, almost abstract and mysterious compositions, as below (the layers being the matrixial ga(u)ze).  She says that art should open us up to our shared experience of trauma (the archetype of which is our birth), in self-fragilisation- one of her many created terms. 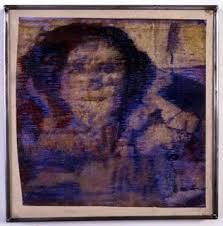 She asks how we can have trust in the world after the Holocaust and looks to the Genesis story, reminding us of Eve’s choice, when she finds that one of her two sons is dead and the other a murderer, to give birth- to carry the future, as all babies do. She names the child Seth, meaning, in Hebrew, to carry, bear.

“The World has gone. I must carry you”  Paul Celan, Jewish poet whose parents died in the Holocaust and who committed suicide in 1970.  These words remind me of the collective experience of Allied prisoners of war working on the Burma railway during WW2 (as depicted in The Narrow Road to the Deep North by Martin Flanagan, which I read recently)

In their creative processes, both these artists refer to the ‘matrixial’ as a model for confluence, reconnection and reception of the common. The ‘matrix’ or ‘matrixial’ is a concept developed by Bracha Ettinger from the connection between her psychoanalytic and artistic practices. In the meeting of patient and therapist, it goes beyond the traditional concepts of relation between the two figures, and creates a space for empathy, both conscious and unconscious, that contains that which is common to both and which belongs to the collective memory. In the process of artistic creation, it implies the activation of this space for empathy, generated by the encounter with the collective memory, and the establishing of new meanings and connections. This ‘matrixial’ approach makes it possible to perceive and to theorise – from a feminist perspective – the ethical links that connect the artist and his/her work to the audience.

Ettinger dissects and reconnects language with the intention of revealing and modifying meanings- mining words for new interpretations, especially those more in tune with the ‘matrixial’ world view.  I have been looking at the world recently using the Ettinger/matrixial gaze.  This has meant seeing more interconnectedness, more human kindness, more opportunities for change and respect for each other and our environment.  Here are some of her re-wordings (often playing around with English, French and Hebrew words with linked, layered or complex and poetic meanings):

patterned becomes matterned, denoting, for example, the primal mode in which responsibility for the other resides.

This engagement with language, in a determined attempt to ‘speak’ the matrixial, is profoundly challenging to the perceived order, as well as playful.

Refusing to look away.  Ettinger advocates deeper acceptance and understanding of sorrow, vulnerability, trauma, since it is in these conditions we are most fully human, most able to experience our connectedness, and to feel empathy/sympathy.  Birth is an event of fundamental significance for Ettinger.  This trauma, for both infant and mother, brings us close to death, causes pain, and effects the loss of our profound connection with our mother in the womb, the coming into being of the ‘other’.  So- art which presents a path to these experiences is important.  We need to open ourselves up to art, to music, to beauty, through self-fragilisation to return to these founding aspects of human-ness.  There is strength in vulnerability- there is no freedom possible without connection/carrying/caring for the other.  Our strength is for carriance, not for paranoia or destructiveness.

Political implications.  Ettinger’s world view is fundamentally challenging to the current order of things.  She says, for example, that we women are people in exile from ourselves and our psychology, our meanings female identities foreclosed before they can exist.  We are in dire need of more meaningful metaphors and stories to explain us to ourselves- so that we can occupy the status of subjects.  She notices how mothers are chronically blamed and silenced rather seen as  important, indeed central to our survival, and proposes matrixial understanding as the key to balancing/overcoming other human psychodramas, such as narratives of dominance (Laius) or nihilism (Oedipus).

Last word to Ettinger herself:

The other and the earth need to be known through affective communicaring in self-fragilization. The knowledge revealed in this way, of the invisible chords to which our senses are not yet attuned, is at the basis of the ethical obligation to attend to the vulnerability of the other, human, animal, and even our shared earth, through care and compassion and in wonder and reverence. Lets work together against retraumatization and toward an understanding of a human subject which is informed by feminine transubjectivity in all genders, and become sensitive to the particular Eros of borderlinking between each I and non-I, which is a kind of love..