Out of the Shadows is the name agreed for a show by several different artists at St John’s Church in Central Leeds.  The event will be in October this year, part of the Love Arts Festival and (we hope) opening on Light Night.  Two of my fellow MA students and myself are working together on a site-specific response to this fascinating place.

I have begun by spending time in the church, which is ‘unadopted’ and under the protection of The Churches Conservation Trust, which describes itself as the ‘national charity saving churches at risk’.  It is only open at limited times, entirely dependent on volunteers and showing significant signs of wear and tear to the amazing Jacobean interior.

The surrounding public space is austere but well-kept, including a walkway paved with old gravestones, beautiful old trees and extensive lawns.  It is open in daylight hours as a thoroughfare between Merrion Street and Upper Briggate.  Apart from people using it as such, it maintains the proud tradition of Church grounds as a magnet for people on the edge of society, in this case young, mostly black and Asian, people openly dealing and using recreational drugs.

So far I have taken digital photographs of 64 versions of the word ‘sacred’ carved using a vast range of letter styles and decorative elements.  I have begun taking rubbings of a selected number of these using a graphite pencil and cartridge paper cut to size (approx. 84 x 30 cms), as below.  I aim to produce a large book of these by hand for display as part of the exhibition. 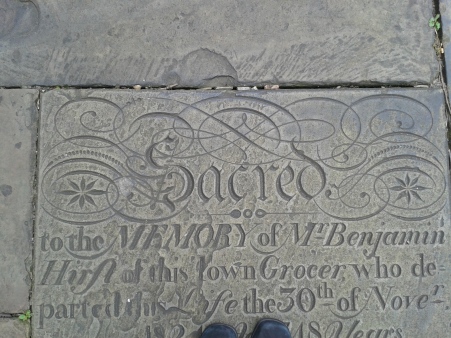 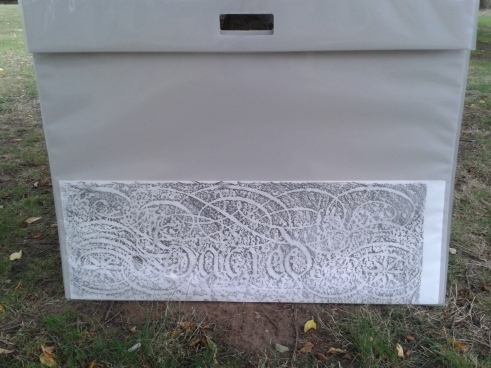 I have also taken digital and film photographs of shadows in the churchyard and will work further on these, using cyanotype and liquid light methods, onto a range of substrates, including fabric, paper and stone, which is a key element in my recent practice.

Returning to my interest in maps, I found that Leeds Central Library is selling a collection of historical maps of Leeds (13 in all covering the very earliest maps from the 16th century, up to 1947), at a reasonable price (£12.99). From these I have photographed the sections of the maps including the church and will be working on image transfer of these to create more artworks for the show.